Yes Bank Analysis: Is it a Good Buy?

#1
There are lot of speculation surrounding Yes Bank,after RBI asked MD and CEO of Yes Bank to step down citing discrepancies in the way bank had reported its bad loan numbers.

Source: BloombergQuint[1]
As soon as the news broke out, brokerages started citing concerns about the future growth of the bank and its fund raising plans

Further, as there was no clarity on who would succeed Rana Kapoor, the future of banks was still uncertain.
However, my analysis of Yes bank is not based on assumption about what may happen in the future, but it will be based on the assumption that in the long term, all the speculative news and volatility will ultimately subside and price of the bank will ultimately start following its underlying fundamentals.

All the above data is a clear evidence that Yes Bank was a well managed bank, growing rapidly.
If we look at the profitability numbers of Yes Bank, the bank’s revenue from interestincreased from Rs.9,981 crores in 2014 to Rs.20267 crores in 2018, an average growth of 20% per year.

All the above numbers are strong evidence that Yes Bank was not only healthy in terms of balance sheet, but also had seen healthy growth in terms of interest income and profitability.

Although Yes bank is a healthy bank, but is it better than its peers? To find out I looked at various ratios of Yes bank and compared them with its peers.
If we compare the price to adjusted book value of Yes bank with industry leaders like HDFC bank, Yes bank is trading at Price to Book value of Rs.1.76, which is much lower than HDFC bank trading at P/BV of 4.15 and Industry Average of 3.56. 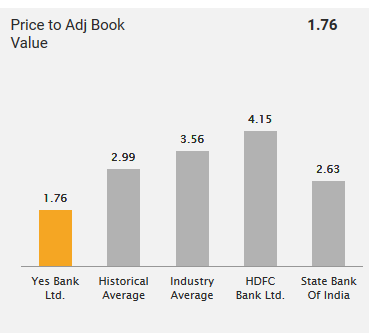 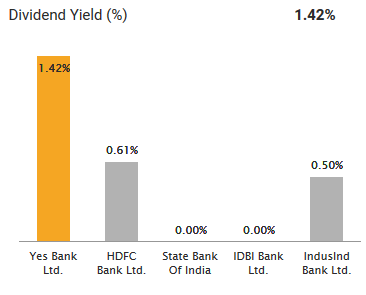 The most important ratio to measure the capital efficiency of a bank is to measure its Return on Assets, ROA.
Yes bank has ROA almost at par with HDFC Bank, very close to the industry average 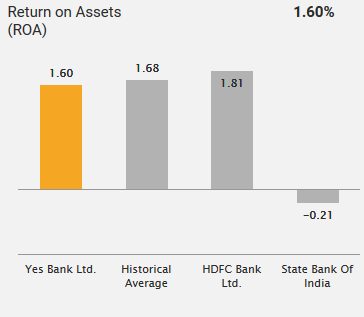 The final parameter is measuring the riskiness of Yes Bank to its peers by comparing the NPA numbers.
Yes bank has a Net NPA of 0.84, which is much lower than the industry average but higher than the market leader HDFC bank. 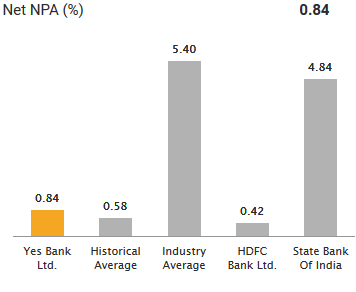 Although if we compare the NPA numbers of Yes Bank from previous year, there has been a significant decline in Net NPA, an indication that bank has been able to mitigate its default risk efficiently.

Yes Bank is currently trading at a P/E of 10.18, much lower than other privat banks lik HDFC, Kotak and ICICI, while its capital efficiency, dividend yield are at par with its peers.

If we sum up all the points mentioned above, we can conclude that Yes bank has strong balance sheet, healthy growth and is very capital efficient in terms of asset allocation.

Although recent events have battered the stock badly, and there are many questions still left un-answered such as who will lead the bank, will he be as visionary as Rana Kapoor was?

Management can make or break the future of a business. Assuming that the successor of Yes bank will be as able as the predecessor, Yes bank looks like a great long term bet for those who can digest high short term volatility, and stay calm even in the rough waters.
Hope the answer was helpful


Disclaimer: Ankit Shrivastav is a SEBI registered Research Analyst (Reg. No. INH000006758), Founder of www.infimoney.com I, or my family members may have positions in the stocks discussed above. I encourage investors to do their own research before investing.
You must log in or register to reply here.
Share: Facebook Twitter Google+ Reddit Pinterest Tumblr WhatsApp Email Link