#41
columbus said:
Yes ,loose food grains from KIRANAWALA will be exempt from GST.
Only Branded (packet) will be charged higher.
Click to expand...
There is another ambiguity in the definition of Branded Packets. So if a wholesaler sells a 50 Kg Rice packet to a retailer on which that wholesaler has put his mark then he has to give GST as it will count as a branded product. Now the retailer sells the product from the 50 Kg packet in loose form so indirectly he is selling a costlier item to the common man.

This was explained by a wholesaler himself on question of exemption of important products.

*February 1986: Union Finance Minister Vishwanath Pratap Singh proposes a major overhaul of the excise taxation structure in the budget for 1986-87.

* 2004: Vijay Kelkar, then advisor to the Finance Ministry, recommends the GST to replace the existing tax regime.

* February 28, 2006: The GST appears in the Budget speech for the first time; Union Finance Minister P Chidambaram sets an ambitious April 1, 2010 as deadline for the GST implementation. He says the Empowered Committee of Finance Ministers will prepare a road map for the GST.

* April 30, 2008: The committee submits a report titled ‘A Model and Roadmap Goods and Services Tax (GST) in India’ to the government

* November 10, 2009: The committee submits a discussion paper in the public domain on the GST welcoming a debate.

* February 2010: Finance Ministry starts mission-mode computerisation of commercial taxes in the States, to lay the foundation for the GST rollout.

* March 29, 2011: The GST Bill referred to the Parliamentary Standing Committee on Finance led by Yashwant Sinha.

* February 2013: Declaring the UPA government’s resolve to introducing the GST, Mr. Chidambaram, in his Budget speech, makes provision for Rs 9,000 crore to compensate the States for the losses incurred because of the GST.

* August 2013: Parliamentary standing committee submits report to Parliament suggesting improvements on the GST. The Bill gets ready for introduction in Parliament.

* 2014: Bill cleared by the Standing Committee lapses as the Lok Sabha is dissolved; the BJP-led NDA government comes to power.

* December 18, 2014: Cabinet gives the approval for the Constitution Amendment Bill (122nd) for the GST.

* May 6, 2015: The Lok Sabha passes the Constitution Amendment Bill for the GST.

* May 12, 2015: The Constitution Amendment Bill is introduced in the Rajya Sabha.

* August 3, 2016: The Rajya Sabha passes the Constitution Amendment Bill by two-thirds majority after more than a year.

* September 12, 2016: The GST Council, decision-maker of all GST matters, is constituted.

* December 3, 2016: The Council fails to reach consensus on key issues like dual control.

* March 20, 2017: The Cabinet approves the CGST, IGST, the UT GST and Compensation Bills; SGST Bills to be passed by State Cabinets and Assemblies.

* May 18, 2017: The GST Council sets rates on all eligible goods except six, and set compensation cess for luxury and sin items.

01-July-2017: Another Ache din starts for the BJP Government

(With inputs from PTI)

I wonder if the brokers now have to split their tax chargeable into 3 categories. I have been charged IGST.

But overall, it doesn't seem like any lesser number of taxes in the bill. Maybe they could simplify the bill a bit. 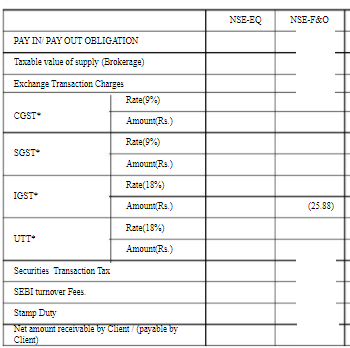 .
A fool and his money are soon parted..

I can see we simply accept the changes which gov want to do, we don't ask any question - life is normal after 5 days and we adopted very easily with 18%.....
but why???
T

No one complained and do we have a choice to not accept it.
When this service tax was started with, it was only on a very few selected services that too with 1% (as far as I remember, or may be with 4%) then 4%, then 5, then 8, then 10, then 12 that too on a wide range of services, then 14 and then 15%.
So what harm is if it is now increased to 18%
.
My views only
My views are based on future charts and not on options, weekly or monthly

#47
Does anyone here have a You Broadband or similar wired internet connection? Yesterday, when I logged in to check my bills, a pop up came up asking me to upload my GST ID. How does GST apply to home internet users (postpaid)? It's a confusing message.
T

#48
Contra said:
Does anyone here have a You Broadband or similar wired internet connection? Yesterday, when I logged in to check my bills, a pop up came up asking me to upload my GST ID. How does GST apply to home internet users (postpaid)? It's a confusing message.
Click to expand...
Nothing confusing.
One can take input credit, if one is under ambit of GST
Thats why they are asking for GSTN.
.
My views only
My views are based on future charts and not on options, weekly or monthly

#49
Good news for some sectors.

GST to have 1 less slab? FM Arun Jaitley hints so; see what may change

The Goods and Services Tax (GST) Council might consider converging the current standard GST rates of 12% and 18% into a single rate after the new indirect tax regime settles down, finance minister Arun Jaitley said on Thursday.

http://www.financialexpress.com/eco...-jaitley-hints-so-see-what-may-change/835943/
.
A fool and his money are soon parted..