#1
Trend could add to volatility in stock prices, say experts

Foreign investors are turning to the derivatives market for increasing exposure to stocks where cash segment buying has hit the upper limit.

The buying limit for stocks in the cash segment is fixed by the company board based on the investor category, which is then approved by the Reserve Bank of India (RBI).

Foreign institutional investors (FIIs) have been building long positions in stocks such as HDFC Bank, Grasim Industries, Tata Chemicals and IDFC, among others, which are still awaiting the Reserve Bank’s approval for raising FII buying limits.

“Since the buying limit for investors in the cash segment has been exhausted, they are now taking exposure through the derivatives segment,” said Amit Gupta, head (derivatives), ICICI Direct.

Market participants said the FII open interest positions in these stocks had risen significantly in the past. Open interest unsettled contracts in stocks like HDFC Bank, IDFC and Grasim Industries had increased, in some cases even doubled, since the expiry of the previous derivatives contract series.

“This generally shows bullishness among investors. Investors don’t want to be on the sidelines and want to be invested in the stock when the cash segment limits are raised,” said Gupta.

According to data given by analysts, the open interest in HDFC Bank has doubled to 24 million shares from over 10 million shares in the last series. The total number of contracts in the HDFC Bank stock futures has risen to 55,455 from 26,590. 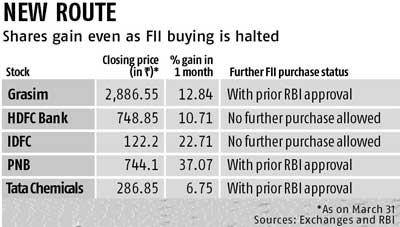 “HDFC Bank is a stock that has been outperforming the market since 2009. It has been an investor favourite for long and the creation of fresh long positions in this stock has gone up substantially,” said Shubham Agarwal, VP senior analyst technical equities, Motilal Oswal Securities.

Similarly, the number of contracts for Grasim Industries has increased to 6,400 from 4,500 during the same period. Open interest in IDFC has gone up to 11,400 contracts from 9,650 in the last series.

“However, we expect to see some profit-booking in the case of IDFC, as the stock has run up quite a bit in the past few months,” said Agarwal. IDFC, which is in the race for acquiring a banking licence, has chosen not to raise FII limits.

Open interest continues to be robust in stocks like Titan Industries and Federal Bank, which recently received RBI approval to raise FII buying limits. Maruti Suzuki, also awaiting RBI approval for raising limits, had seen a sharp build-up of open interest positions. But analysts said the issue pertaining to the proposed establishment of a promoter-controlled plant in Gujarat had hit the stock price, as well as the stock futures positions taken by investors. Open interest positions in Maruti Suzuki have fallen to 13,000 contracts from 15,000 seen at the last expiry.

Analysts said investors increasing exposure in these stocks through the derivatives markets were likely to benefit the most once these companies received RBI approval for raising FII limits. However, some are concerned that this could add to volatility in the stock prices.

“In the leveraged F&O segment, closure of positions is easier and causes prices to fluctuate. The cash segment, on the other hand, is much more stable and it is not that easy to close positions there,” said Gupta.