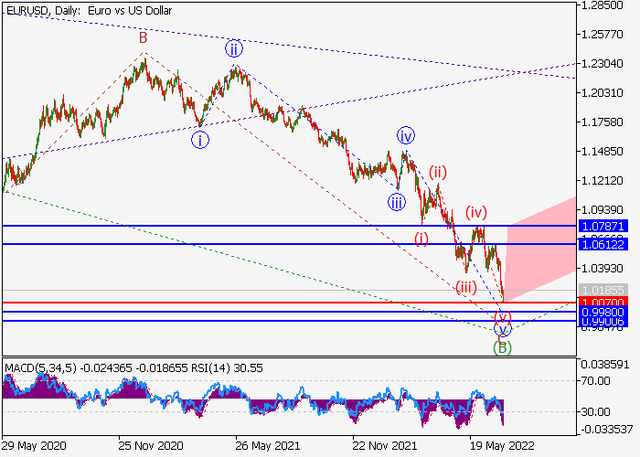 Gold positions came under pressure on Friday amid the publication of a stronger report on the US labor market: the Unemployment Rate remained at 3.6%, while Employment Change rose by 372 thousand, well ahead of the projected 268 thousand, which allows investors to hope for continued tightening of monetary policy by the US Federal Reserve. According to the CME FedWatch indicator, more than 92% of traders are confident in the "hawkish" rhetoric at the next meeting of the regulator, as well as in the adjustment of the value by 75 basis points at the end of this month. 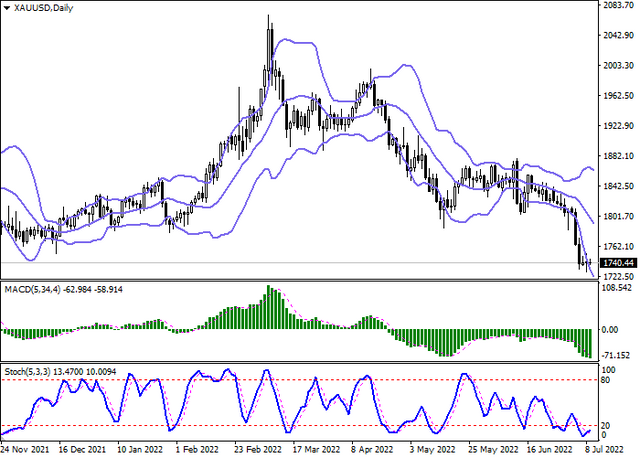 Bollinger Bands in D1 chart demonstrate a stable decrease. The price range is expanding, making way to new record lows for the "bears". MACD is going down, keeping a fairly stable sell signal (located below the signal line). Stochastic has reached its lows and is trying to reverse upwards, indicating risks of oversold instrument in the ultra-short term. 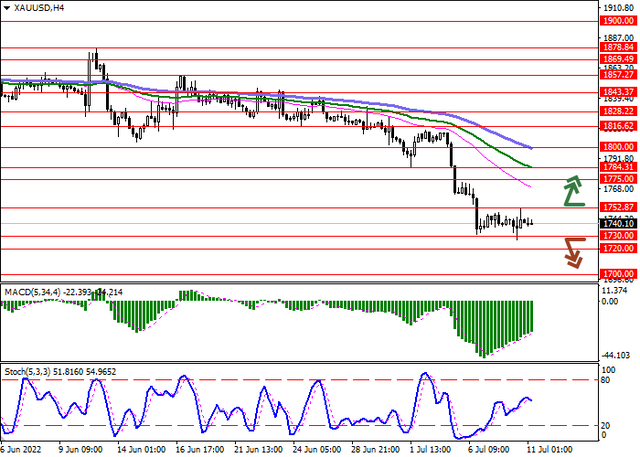 The US stock market continues to decline, and yesterday's drop in indices was one of the most dynamic in recent times. First of all, investors' concerns are related to the growth of the consumer price index in the USA, data on which will be presented tomorrow. If the indicator exceeds 9.0%, an emergency increase in the interest rate by 100 basis points from the American financial regulator is not excluded, which could bring down stock markets at the moment, especially the high-tech sector, which traditionally depends on the cost of borrowing. 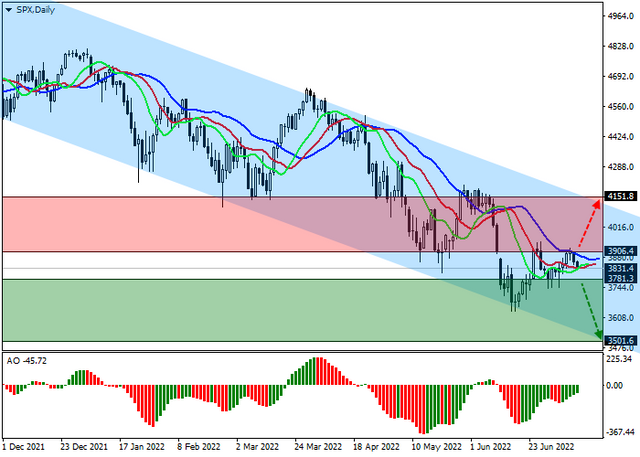 The index quotes are traded in a global descending channel, being in the middle of the range. Technical indicators continue to hold a stable sell signal: fast EMAs on the alligator indicator are below the signal line, and the histogram of the AO oscillator, holding in the sales zone, forms ascending bars.

On the daily chart of the asset, a global sideways corridor of 306–380 is developing, within which the price has approached its lower border. There has not yet been a full-fledged attempt to consolidate below it but the likelihood of this remains quite high. The four-hour chart of the asset shows that if the quotes fix below the support level of 308, it is possible to continue to decline and reach an even stronger level of 280. 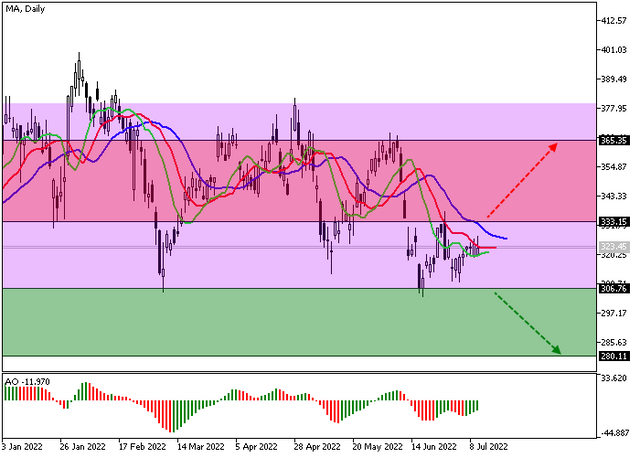 It is confirmed by the readings of technical indicators, which, working out a local correction, keep a stable sell signal: fast EMAs on the Alligator indicator are below the signal line, and the AO oscillator histogram forms new bars below the transition level.
Visit solidecn.com
Trust Pilot Score 4.9

#5
The shares of Meta Platforms, which owns the world's largest social network Facebook, are moving within a downtrend around 163. On the daily chart of the asset, a global Triangle pattern is forming with local extremes at 18 and 150, and a sharp narrowing of the formation range may indicate that the price is entering its last third, where a signal to exit it will develop. 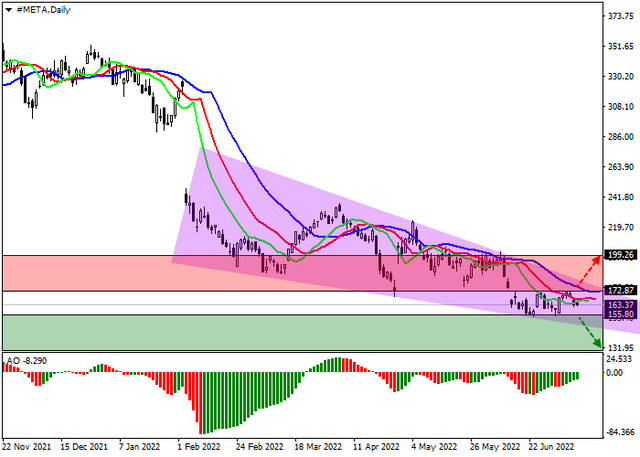 On the four-hour chart of the asset, the quotes are completing the formation of another ascending wave, after which they can break through the lower border of the pattern around 155 since the probability of a downside implementation is much higher. Technical indicators confirm the possibility of a decline, reversing downwards: fast EMAs on the Alligator indicator are below the signal line, and the AO oscillator histogram forms upward bars in the sell zone.
Visit solidecn.com
Trust Pilot Score 4.9

EURUSD - the euro is held near the parity level with the US dollar
The European currency shows multidirectional trading dynamics, consolidating near the key level of 1.0000, which has not yet been actively tested. The day before, the instrument also traded near the parity level and even tried to fall to the level of 0.9990 for some time; however, the "bulls" quickly regained the lost positions. The euro is certainly receiving strong technical support near this psychological level, but the pressure on the single currency only intensifies as the region's economic outlook deteriorates. The last time the euro traded at parity against the US dollar was in December 2002.

Yesterday's macroeconomic statistics put additional pressure on the positions of the single currency, intensifying talks about a possible recession in the European economy: ZEW Survey on Economic Sentiment fell sharply in July from –28.0 to –51.1 points, while analysts expected a decline to only –32.8 points. In turn, ZEW Survey on Current Situation in Germany over the same period fell from –27.6 to –45.8 points, while the forecast was –34.5 points, and the Economic Sentiment index fell from –28.0 to –53.8 points, which also turned out to be significantly worse than market forecasts at the level of –38.3 points. Today, investors are focused on statistics on the dynamics of consumer prices in Germany in June, as well as May data on the dynamics of industrial production in the eurozone. 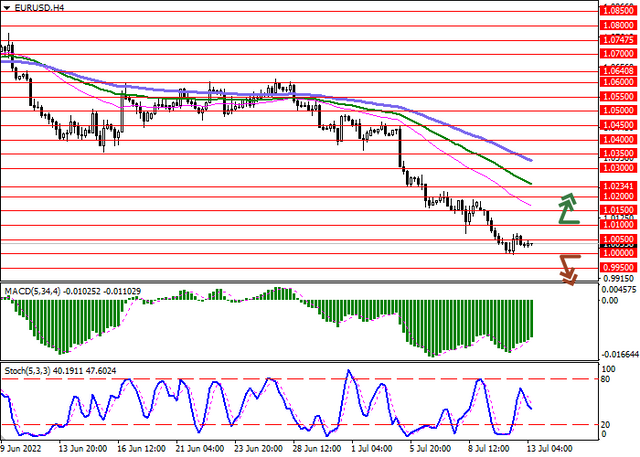 Bollinger Bands in D1 chart demonstrate active decrease. The price range is expanding, making way to new record lows for the "bears". MACD is going down preserving a stable sell signal (located below the signal line). Stochastic retains downward direction but is located in close proximity to its lows, which indicates the risks of oversold EUR in the ultra-short term. 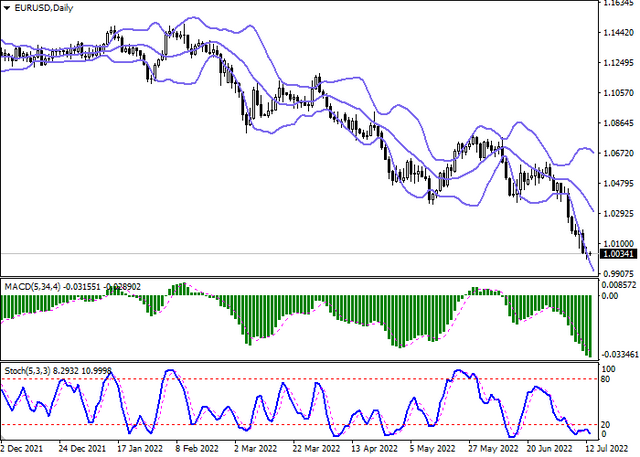 Silver - the instrument is developing correctional dynamics
Trading activity remains subdued this morning as analysts await the publication of key macroeconomic statistics on US consumer inflation for June, the current forecasts for which suggest acceleration from 8.6% to 8.8%, which will be a new record since December 1981. Faster growth is also not ruled out, which could put significant pressure on the US Federal Reserve when choosing the next measures to tighten monetary policy. The regulator's meeting will be held next week, and at the moment a rate hike of 50 or 75 basis points is expected. About 10% of analysts suggest an increase of 100 basis points at once, but this is possible only in the event of a sharp acceleration of inflation in the country.

Additional pressure on the positions of silver is exerted by the situation with the incidence of coronavirus in China, where outbreaks of infections are still observed, which, coupled with the policy of "zero tolerance", leads to new quarantine restrictions, which, in turn, are causing the fall in demand for industrial goods, as well as raw materials, including oil, copper and silver. 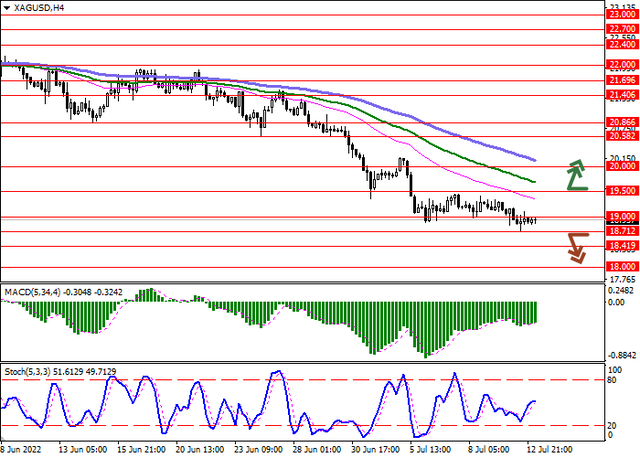 Bollinger Bands in D1 chart demonstrate a stable decrease. The price range is almost unchanged, but it remains rather spacious for the current level of activity in the market. MACD indicator tries to reverse to growth and to form a new buy signal (the histogram should consolidate above the signal line). Stochastic is showing a similar trend, trying to retreat from its lows, signaling that silver is oversold in the ultra-short term. USDJPY - Currency pair continues to rise
The downward dynamics of the national currency are developing despite the measures to purchase assets for record amounts taken by the Bank of Japan. However, there is still hope for early stabilization of the yen: the elections to the country's parliament ended yesterday, in which the party of the current Prime Minister Fumio Kishida won. The government's approval rating rose to a record high of 63.2%, which means that aggressive monetary policy is likely to continue. Also, investors are encouraged by positive macroeconomic indicators: the corporate goods price index in June rose by 0.7%, which is higher than the 0.5% expected by analysts, and by 9.2% YoY, which exceeds the forecast of 8.8% and only 0.1% lower than last month. 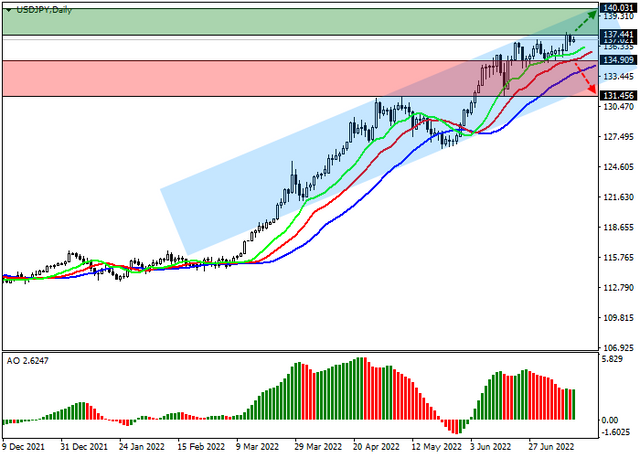 The Australian dollar is showing an uncertain rise, building on the corrective momentum that was formed on Tuesday, July 12, when AUDUSD traded at record lows of June 2020. The instrument is testing the level of 0.677 for a breakout, receiving support from strong macroeconomic statistics from Australia and China. In turn, the growing demand for the US currency prevents the emergence of a more active "bullish" dynamics. 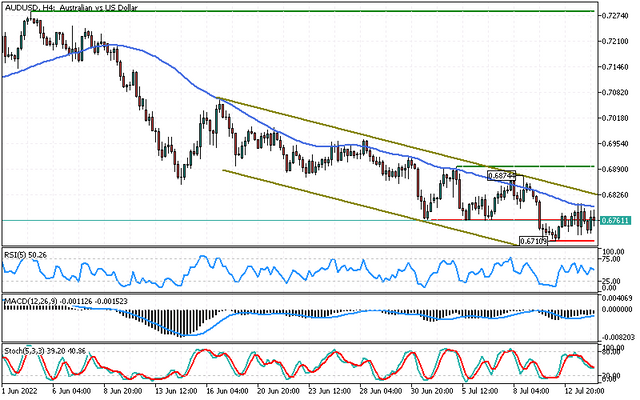 Conflicting macroeconomic statistics from the EU do not allow the euro to interrupt the protracted decline: inflation in Germany in June was 7.6%, which is the same as in May, and CPI in France rose not as much as analysts expected but still amounted to 5.8%, up from 5.2% in May, while the same figure for Spain reached a record high of 10.2%, up sharply from 8.7% in May. With such a significant increase in local values, the composite price index of the EU countries will also increase significantly, preventing a possible reversal and growth of the euro. 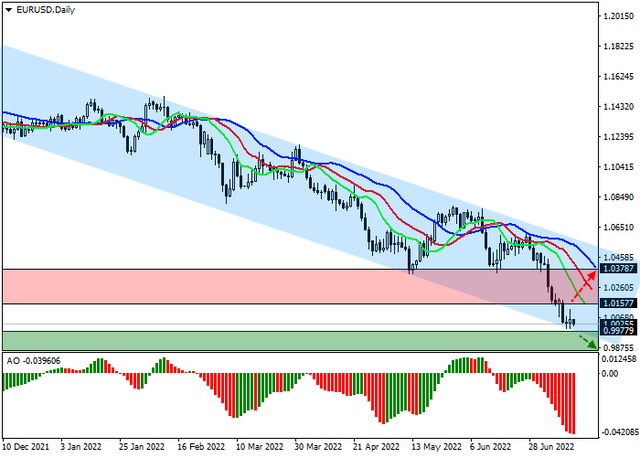 The trading instrument moves within the global downward channel, near the support line. Technical indicators maintain a global sell signal: fast EMAs on the Alligator indicator expand the range of fluctuations in the direction of decline, and the AO oscillator histogram forms downward bars in the sell zone.