Today abandoned baby pattern formed in HDFC....What are your thoughts on that ? Anyone buying ? 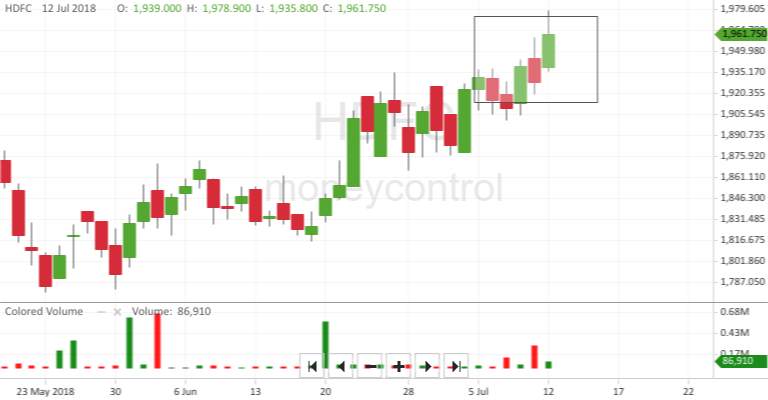 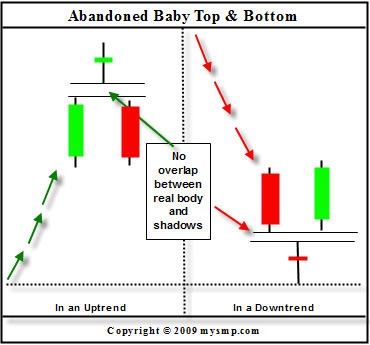 https://www.investopedia.com/terms/b/bearish-abandoned-baby.asp
.
A fool and his money are soon parted..

#3
I just looked up on John's book and found that abandoned baby occurs for both bullish and bearish reversal. But I dont see a doji which will characterize the said candlestick pattern. Can you explain what book/weblink you saw to ascertain that.
T

#4
Rajasekaran1976 said:
I just looked up on John's book and found that abandoned baby occurs for both bullish and bearish reversal. But I dont see a doji which will characterize the said candlestick pattern. Can you explain what book/weblink you saw to ascertain that.
Click to expand...
Rajasekaran, look at the bottom link given by timepass, the explanations are given there -
https://www.investopedia.com/terms/b/bearish-abandoned-baby.asp

DEFINITION of 'Bearish Abandoned Baby'
A bearish abandoned baby is a type of candlestick pattern identified by traders to signal a reversal in the current uptrend. This pattern is formed when a doji is preceded by a white candlestick with a lower closing price and followed by a red candlestick with a lower opening price. Thus, a doji candle can be an important signal for a trader seeking to identify either a bearish or bullish trend.


Red candlestick: A red candlestick occurs when a security’s price closes lower than its open. This type of candlestick is typically black or red on a trading chart.


Doji: A doji candlestick occurs when a security has the same open and closing price. This will typically be represented by a dash on a trading chart.

A bearish abandoned baby is reported when a security’s technical chart shows a white candlestick followed by a doji with a higher open/close price than the preceding day's close and then a red candlestick with a lower open price in comparison to the doji. This pattern will often lead to a bearish price reversal. Thus, a bearish abandoned baby pattern can be a signal to sell or short sell the security in order to obtain profit from a falling price.


A bearish abandoned baby can be a rare but reliable candlestick pattern. This is because doji candlesticks are not particularly common given the high volumes that most securities report during the trading day. Market traders also suggest that the accuracy of a bearish abandoned baby reversal signal is greatly improved when it is used in conjunction with other technical indicators, such as the Moving Average Convergence Divergence (MACD) and the Relative Strength Index (RSI), to confirm the reversal.