A Systematic Framework for Momentum and Pullback Swing Trading

#1
Hey! This is for the same framework that I talk about on my thread in Advanced Trading Strategies. Figured it'd be better to have the thread in the Equities forum since we actively discuss that. Here's the link to the old thread, I'll repost some of the important content too.

https://www.traderji.com/community/threads/systematic-momentum-and-pullback-swing-trading.109167/
"Only the game can teach you the game."- Jesse Livermore

#2
On this thread, I'll describe some systems that we can use to trade. I've been in the markets since about 4 years now, started when I was 15. I'm not a fully automated/quant trader, rather a market participant who likes to objectify trading setups and execute correctly, following a process. There can be aspects of it which are discretionary, but I place a strong focus on ensuring that whatever we are doing is repeatable. Trading needs to be process based and consistent.

I invest for the long term as well. While that has mainly been discretionary, I'm looking to change that and have incorporated some objectivity into investments as well. We'll get into that too.

A summary of trading systems that I plan on covering (this can change):
1. A swing high inside bar system that looks to long after a breakout from a consolidation zone. These zones are defined objectively.
2. A 21MA pullback system based on swing highs and inside bars.
3. A positional trading momentum system that looks to buy after signs of strength are shown post-pullback.

Rather than describe the three systems separately and confuse you all, let me try to show you the essence of one system first, and we can start looking at setups in the live market.

Here's a quick description of a swing high and an inside bar, for those of you unfamiliar.
A swing high is a candle with a lower high before it and a lower high after it. 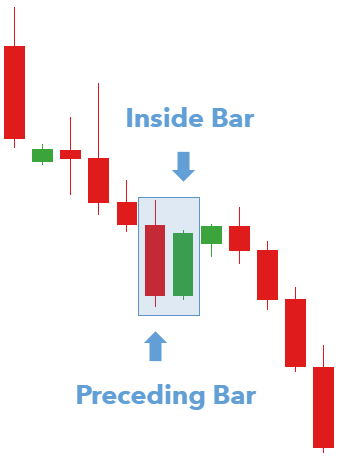 An inside bar is formed when the range of the candle is within its preceding candle. In the picture above, the green candle is an inside bar.

Candle 2 is a swing high, and candle 3 is an inside bar. Is that simple enough to understand?

Now our setup is not to buy a breakout of a swing high inside bar (SHIB?). Rather, after a SHIB has been formed, we wait for a couple of candles to be formed whose low does not breach the low of candle 2. Have a look at what I would consider a valid setup:

I'd posted this Cipla setup on my blog too. Candle 2 was a swing high as confirmed by the formation of candle 3 which had a lower high, and candle 3 was also an inside bar. Now for the next two candles, we do not want it to breach the low of candle 2. Candle 4 doesn't, neither does Candle 5. The setup is complete and we look to buy at a break of the high of candle 2.

It may seem complicated in a written form, but have a look at it on charts, it's quite simple and intuitive.

You'll notice that the Cipla trade above is about to hit the stop loss. I could have easily cherry picked a setup that worked, but by starting off with a losing trade I want to convey some relevant info about this setup. We'll most likely have a win rate of less than 50% with this setup, but because of decent risk reward opportunities and strong money management, we can have a positive expectancy. My next post is going to be about position sizing.

Don't just look at this as a setup to speculate. There are plenty of ways you can make use of it. For example, one way I've begun using it is to observe the names that show up in our screens everyday and form sectoral views. These views can be used to adjust your sectoral allocations in your long term portfolio. If one of our holdings' names show up in the screen, we can trade around a core position. There's so much you can do.

I've only recently begun testing this on Indian equities, I trade a similar variant of the setup on currencies too.

I blog about the markets on www.marginstone.com
S

#5
Should one limit the max amount allocated for one trade too?